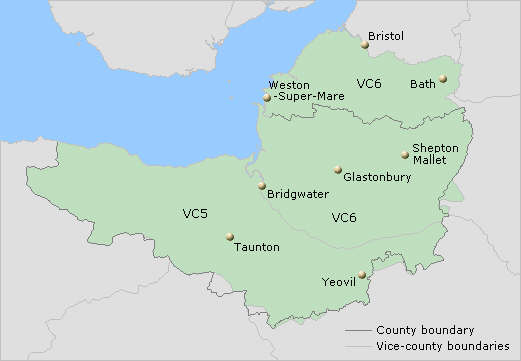 Members of Somerset Rare Plants Group record at a scale of monad (1km square) level, or finer. Displays of records/species per monad are available HERE

The mapping programme MapMate is used by the Somerset VCRs to store, analyse and share data, all records being passed on to the Botanical Society of the British Isles.  MapMate has only been routinely used for Somerset plant records since the late 1990s.  Many historical records have yet to be added; however the records collected for the Atlas Flora of Somerset (by P.R. Green, I.P. Green and G.A. Crouch, 1997) have been added to MapMate as “skeleton” tetrad spots (with no precise date or recorder details).

Using MapMate, the density of both species and records can be mapped at tetrad level.

Maps of species and record density per tetrad since 2000 are generated regularly to help direct recording effort for the BSBI’s planned Atlas 2020.

In Somerset, all recording is at monad scale or better, so to help target recording for Atlas 2020 species density per monad has also been mapped using MapMate.

This introduction to Recording in Somerset was written by Helena Crouch.