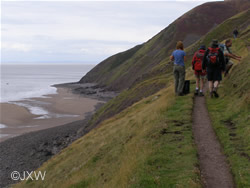 Take the footpath over the river into the woods, turn left and follow the footpath roughly northwards to Hurlstone Point. The first part of the path is wooded and in places the hedges are made of Great Barberry, but it then opens out into a gorse and scrub grassland and eventually leads to the thin rocky grassland by Hurlstone Point itself where the remains of a Coastguard Lookout stand. This is good for Sea Stork’s-bill which grows in the short turf and the Point is Somerset’s only area for Rock Sea-spurrey.

If one takes the right turning after crossing the bridge from the car park the footpath follows through a treed area, past a London Plane on the right of the path and eventually opens out into two fields which are extremely good for Fiddle Dock, Clustered Clover, Musk Stork’s-bill and the occasional plant of White Mullein (Yellow flowered form).